Sleep/wakefulness, behaviors, and functions of the body are under control of the circadian rhythm, a cycle of ca. 24 hours. Those functions include body temperature, secretion of hormones, autonomic functions and so on. The biological clock (circadian clock) in the suprachiasmatic nucleus (SCN) of the hypothalamus is the central pacemaker in mammals, orchestrating multiple circadian biological rhythms in the organism. The circadian clock enabled the anticipation of daily changes in the light-dark environment tied to the rotation of Earth to optimize organism’s behavior and internal environment. Therefore, disturbance of the circadian clock due to jet-lag, night shift, and so on, leads to the augmentation of risks of various health problems and diseases, such as sleep disorders, emotional disorders, cancer and metabolic syndromes. Therefore, understanding of the neural mechanism underlying the circadian rhythm and development of method (medication) to control the circadian clock are of primary significance for those living in the modern society where maintaining adequate daily rhythm is not easy.

The SCN consists of ca. 20,000 neurons. These neurons are not homogeneous but are a mixture of various types with different characteristics. Although most of SCN neurons have some ability to generate autonomous circadian oscillations, intercellular communications among SCN clock neurons through the neuronal and diffusible network are critical for the SCN to generate highly robust and coherent oscillations at the population level. In contrast to the circadian clock working within the individual cells (cellular clocks), whose molecular machinery has been largely elucidated, the principle of the SCN neuronal network remains unknown.

We are studying the neural mechanism underlying the central circadian clock of the SCN by neuronal type-specific manipulations of gene expression and neural activities in mice. For instance, we found that arginine vasopressin (AVP)-producing neurons of the SCN play a critical role in the generation of circadian rhythm and the determination of circadian period by disrupting cellular clocks or manipulating the period of cellular clocks specifically in AVP neurons (Mieda et al, Neuron 2015; Mieda et al, Curr Biol 2016). To understand the principle of the SCN network, we apply electrophysiological, pharmacological, histological, behavioral, optogenetic, and molecular approaches to those various genetically-engineered mice. 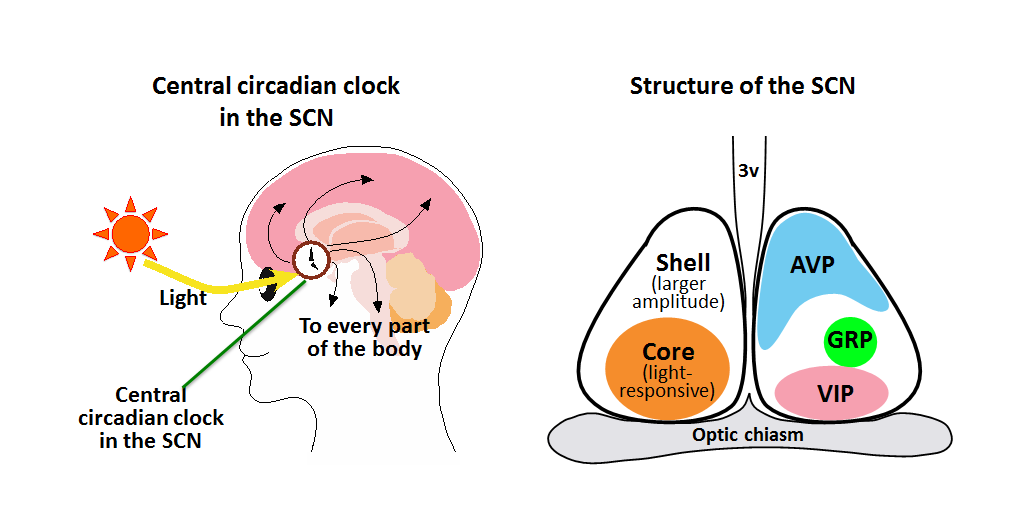 Left: The time information generated by the suprachiasmatic nucleus (SCN) is delivered to every part of the body to control various body functions. The difference between the circadian clock cycle (about 24 hr) and the earth’s rotation period (just 24 hr) is canceled every day when the central circadian clock is reset by the information of the daylight conveyed from the eye. 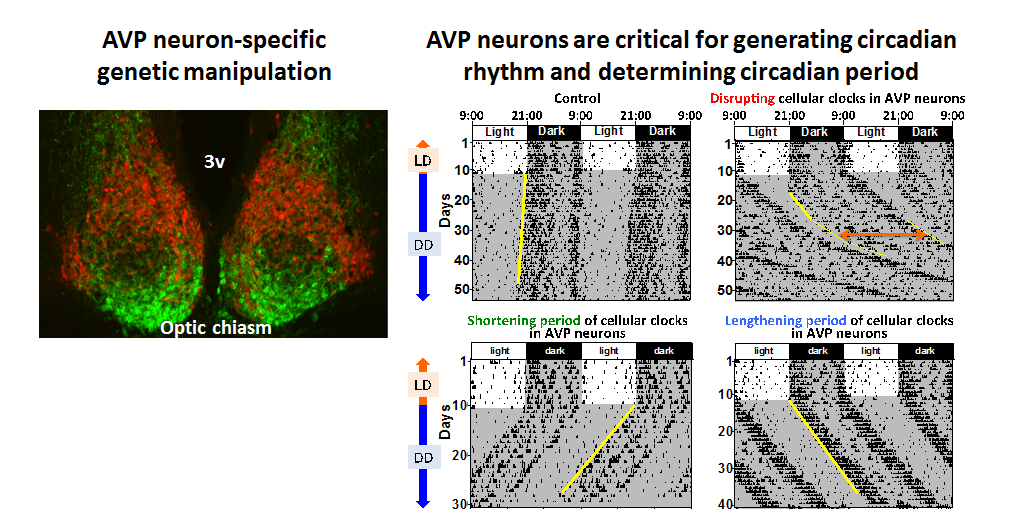 Left: We generated a BAC transgenic mouse line for genetic manipulations specific to AVP neurons. Here, a red fluorescent protein was expressed in AVP neurons. VIP was immuno-stained in green.

(2) Inputs and outputs of the central circadian clock

We are interested in the pathways by which the SCN central clock regulates sleep/wakefulness, behaviors, feeding, autonomic functions, and so on. In addition, we aim to identify the factors and neural pathways that modify the central clock. We are using optogenetic and chemogenetic methods to artificially manipulate neural activities, recombinant viral vectors to trace neural networks, and gene expression profiling to identify candidates of regulatory factors.

We have been studying mainly on the regulation of sleep/wakefulness by the neuropeptides orexin A and orexin B（Mieda et al, J Neurosci 2011; Hasegawa et al, JCI 2014; Hasegawa et al, PNAS 2017; etc）. In addition, we comprehensively identified neurons projecting hypothalamic histamine neurons, which play a critical role in the promotion of wakefulness. Currently, we are studying how those identified upstream neurons regulate histamine neurons. Furthermore, we are focusing on the reciprocal interaction between the central circadian clock and the neural network regulating sleep/wakefulness.

Histamine neurons are concentrated in the tuberomammillary nucleus of the hypothalamus and send projections throughout the brain to release histamine. The histaminergic system in the brain promotes wakefulness, as the hypnotic effect of histamine receptor blockers is well known. In addition, histamine neurons are involved in the regulation of circadian rhythms, body temperature, and energy metabolism, as well as in the higher brain functions such as cognition, and learning and memory. However, it still remains unclear how histamine neurons regulate multiple brain and bodily functions in a coordinated manner. Therefore, we aimed to comprehensively identify the information that histamine neurons receive. For this purpose, we have searched the upstream input neurons of histamine neurons by means of a recently developed transsynaptic retrograde tracing technology utilizing genetically-modified rabies virus. We are currently conducting the characterization of those upstream neurons. 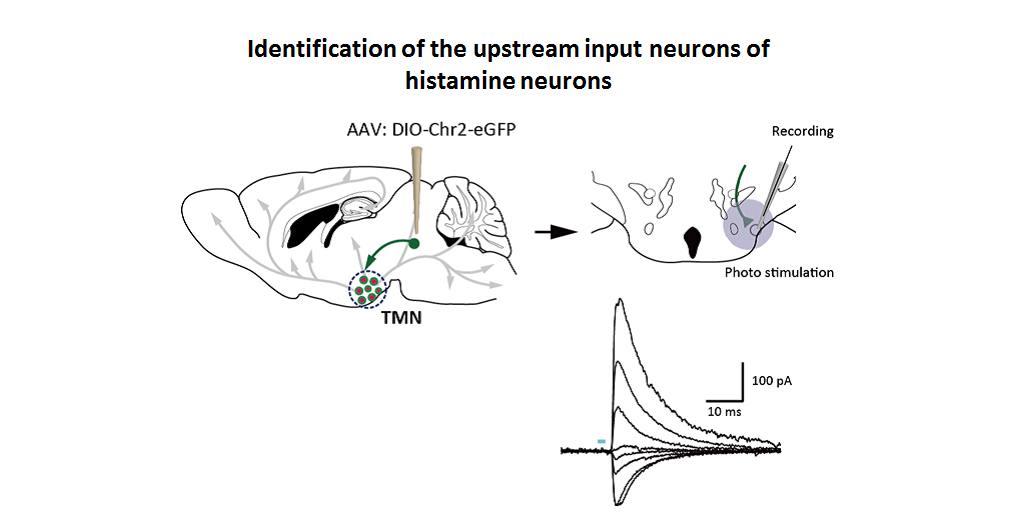 An example of upstream neurons. Optogenetic stimulation of the nerve terminals of those neurons in the tuberomammillary nucleus (TMN) evokes Cl- current in histamine neurons.